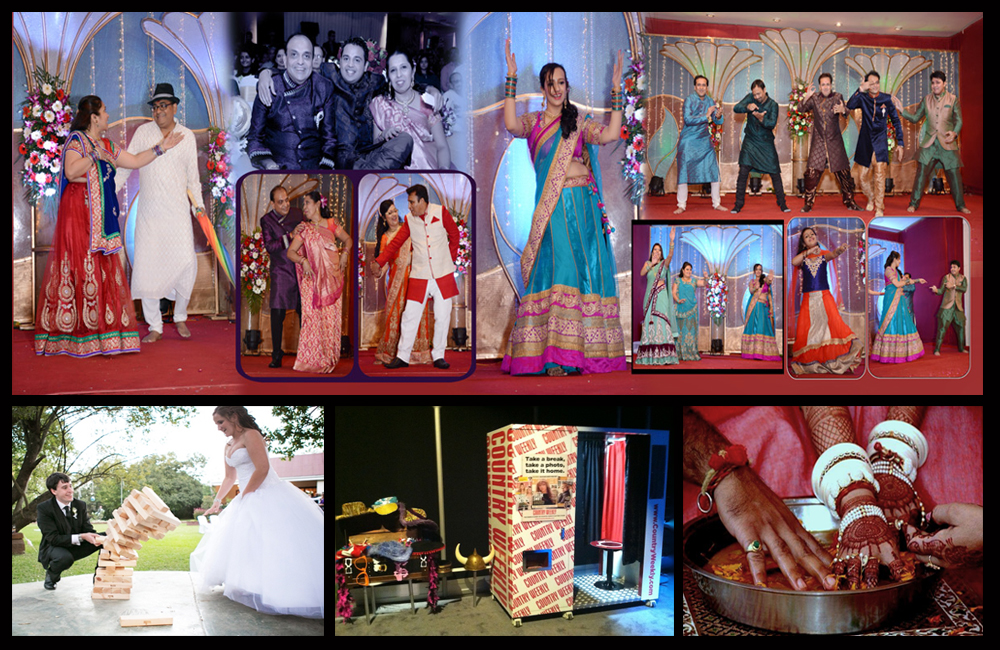 Wedding is the beginning of new life with new people and also brings to families together. Wedding carries numerous fears, doubts, qualms added to the veiled delight for any bride. A very thought of wedding brings into mind various ceremonies and rituals,where people come, sit, eat & go home afterwards. But nowadays Indian wedding evolves various games to make the perfect starter for the newlyweds & their families to get to know each other.

You have to just include few simple fun games during and after wedding to make it little hatke from others. This is an inexpensive idea or pocket-friendly and can be easily opted by anyone. So, those who wish to have little fun & masti to their wedding, here are some interesting and exciting concepts or ideas which will surely leave you and your guest pleased.

The word ‘Antakshari‘ itself defines the game concept. It is a popular game which involves music and songs. In this game, competition is held between two groups (bride and groom’s families) & is a fantabulous way of bringing all together. One team starts the game with choosing & singing a song. Then second team has to sing a different one that begins with the letter on which the previous song ended. It is full of joy and fun to play & watch.

In every Hindu wedding, the groom is directed to remove his shoes prior to entering the mandap, where holy rituals are performed. The bride’s sister or maids accompanying her to grab the groom’s shoes and hide them. After the marriage ceremony, groom’s sister-in-law or maids demand some amount from groom in return of the shoes. In this sweet prank and negotiations happen between them & the deal get finalized at a handsome amount.

In this wedding game, the couple is made to sit facing each other with a bowl of milk in front of them. A ring is dropped in the bowl and the newlyweds are asked to find the ring. Whoever gets the ring first is declared as the winner. It is believed that the winner of the game rules the roost for the entire life.

This is almost a modern addition to the wedding games. Quiz game is a way of testing how well the bride and groom know each other. It involves the questionnaire asked privately to the bride regarding groom’s favourite dish, colour, etc. & vice-versa. The person who answers most questions correctly is the winner. This game has a special importance in arranged marriages, where traditionally, the wedded pair were unknown to each other for long period of time.

This is a very famous game involving couples. In paper dance game, spread a sheet of paper on the floor and each couple has to stand on that paper. As the music starts, ask them to dance on that piece of paper, without stepping their feet out of the paper even once. When music changes, fold a part of the paper that they are dancing on. Trick is that they should not step out of that sheet. As the size of the paper decreases, you will see more & more couples tumbling towards elimination. The couples that reaches the end of the game wins.

It’s fun to try and slip out the bricks and stacking them without tumbling down the pile. Jenga is played with 54 wooden blocks. Each block is three times as long as its width, and one fifth as thick as its length. Make a queue & then each person have to take out a block out and try to place it on the top without making it fall over. Loser might have to do something silly.

Photos are exciting, memorable and enduring. Setting up photo-booth as fun game in wedding ceremony is one of the unique and innovative ideas. You have to arrange a photo-booth at you wedding, this will give your photos an amazing background as well as some candid pictures. Guest can take home for memories. Adding some more props to the photo-booth like huge goggles, sign boards, etc. will create interest to your photographs.

Games mentioned above can totally enhance the merriment and take the ceremony to an exciting level. Wedding which is thoroughly encircled with ceremonies, hymns and emotions, can be made enjoyable & entertaining with those games. Such fun and games are an essential part of Indian wedding celebrations.